I’ve been trying to read more.

Not just staring at my phone.

Unless there’s a book on it!

I read a decent percentage of Stephenson’s Baroque Cycle that way.

A few years ago.

I didn’t finish the last book.

I’m not saying you shouldn’t spend a ton of time staring into a block of glass that’s permanently fused to your hand, as long as there’s a book on the screen.

But yeah, I’m trying to get back to books.

Six years ago I asked for book recommendations on Twitter, and revisited those more recently to provide a progress report.

These days I have a tall backlog of books in my To Read pile on Goodreads.

They come from the year-end lists, at places like NPR, sure, but also in email newsletters that I don’t remember signing up for.

If you read Robin Sloan’s books, or John Darnielle’s, maybe you signed up for a newsletter from Farrar, Straus and Giroux? I guess I did. Their list of “Favorite Books” of 2017 isn’t just a best-of-the-year list, it includes books they came back to last year, or read for the first time, or just wanted to share again.

In 2017, according to the stuff I logged on Goodreads, I only finished around 20 books. And a few of those were Daredevil comic anthologies. And one of them was a Star Wars novel. (Canon, though. Or Legends, or whatever it’s called now.)

I set a higher goal for 2018, and immediately started the year by reading a cookbook.

That doesn’t sound too intellectual, right? But no, really, the Momofuku cookbook is something else. Yes, recipes. Yes, food from David Chang’s restaurants, but for someone who usually scrolls straight through all the preamble when I’m just looking for a different gluten-free waffles recipe on a tight Saturday morning deadline, I was completely drawn in by all the prose around the recipes, not just explaining the methods and techniques, but also the story of his restaurants (as of a bunch of years ago when this was published, so it’s only the first two or three) and moreso, of his cooking.

You should read it.

Even the section on hams.

So it’s a cookbook, and I’ve been making stuff from it, but the big thing it’s inspiring me to do?

Oh goodness for lack of a better term, to “take it and turn it.”

To improvise more. To change the recipe, or the project plan, or the life goal, by some increment that makes it exponentially more a reflection of me than some objective idea. 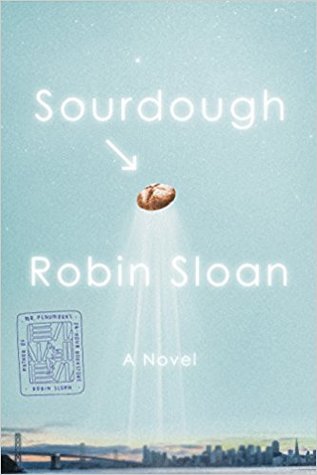 I read Sourdough last fall, mostly in airports on a short trip to Chicago.

You should read it if you like magic realism. And bread. And San Francisco — well, liking it is optional, but some familiarity with it will help. (I don’t think I like San Francisco anymore.)

Like a sourdough starter, Robin’s book will reflect your own ambitions.

Yes, sourdough starter can do that. Apparently.

Is it cheating to recommend a book wherein you know the author since Kindergarten? No. No, it is not. Roben’s prose in Hotel Scarface is a delight, as it was when we took Dr. Lavin’s AP English class together, senior year of high school.

So it’s a fast, fun, titillating read. About the cocaine business. Extra points if you grew up in or around Miami, as we did. Double extra points if it makes you wonder how much cocaine-related revenue funded Dade County Public Schools.

But the most impressive thing to me? He spent 20 years on this. I won’t spoil the backstory, but Roben has been reporting this out for-flipping-ever.